Wraysbury is a village and civil parish in the Royal Borough of Windsor and Maidenhead in England. It is under the western approach path of London Heathrow airport.[2] It is located on the east bank of the River Thames, roughly midway between Windsor and Staines-upon-Thames, and 18 miles (29 km) west by south-west of London.

Historically part of Buckinghamshire, Wraysbury was made part of the new non-metropolitan Berkshire in 1974, under the Local Government Act 1972. The Wraysbury Reservoir is located to the east, in the Spelthorne district of Surrey.

Investigation by Windsor and Wraysbury Archaeological Society of a field in the centre of Wraysbury to the east of St Andrew’s Church revealed evidence of human activity in Neolithic times. Many hundreds of flint artefacts were found and are now in the care of the Windsor Museum collection.

The village name was traditionally spelt Wyrardisbury; it is Anglo Saxon in origin and means ‘Wïgrǣd’s fort’. Its name is recorded in the Domesday Book of 1086 as Wirecesberie[3] and as Wiredesbur in 1195. The name is seen again as Wyrardesbury in 1422.[4]

Magna Carta Island, in the parish of Wraysbury, is one of the sites traditionally suggested for the sealing of the Magna Carta in 1215.

On the Ankerwycke estate in the village are the ruins of a Benedictine nunnery, founded in the reign of King Henry II. One of the 50 oldest trees in the United Kingdom can be found here: at around 2000 years old,[5] the Ankerwycke Yew dates from the Iron Age, and is so wide that you can fit a Mini Cooper behind its trunk and not see it from the other side. Local legend says that Anne Boleyn once sat under the tree, while residing at the Ankerwycke estate, but this has not been verified.[6][7] The Ankerwycke estate was bought by John Blagrove, a prominent Jamaican slave owner, who did much to improve the estate.[8]

The parish church of St Andrew is a Gothic structure, intermediate between Norman and Early English, supposed to have been built by King John.[9] The parish registers date from the year 1734.[6]

William Pynchon, the founder of Springfield, Massachusetts, died in Wraysbury in 1662 and was buried at St Andrew’s Church.

Wraysbury in the 19th century[edit]

For centuries, agricultural and mill work had been the principal areas of employment for the villagers; and as late as 1831, census returns show that of the 135 families in the village, 62 were employed in agriculture while 68 made their living in the mills.

This compares to the most recent census in which around 12% of the population work from home and the average distance travelled to work is 9 miles (14.24 km).[10]

The enclosure of the parish of Wraysbury was ordered by a private Enclosure Act of 1799 and was signed by the commissioners in 1803. The map of the village was redrawn by Thomas Bainbridge and shows the distribution of the lands in the following[clarification needed] the enclosure.

Immediately prior to this the common land of the village was owned by the Lord of the Manor of Wraysbury, at that time John Simon Harcourt, the church and the trustees of William Gyll Esq., although, as common land, they were subject to legal rights of pasture and grazing for copyholders and other tenants. In addition to those with legal rights over the land, the poor of the district would have had ‘real’ or ‘customary rights‘, for example to feed their livestock or gather wood for fuel.

The only beneficiaries from enclosure were those who could show legal rights over the common land, such as copyholders and tenants of the manor. The enclosure enshrined their rights, converting “rights of common” and allocating an area of land commensurate with their rights, as close to their farmhouse as was convenient. The poor were overlooked in this process, and were no longer allowed to forage for fuel or graze their animals.

The smaller landowners of Wraysbury to benefit from enclosure included Nathanial Wilmot, Nathanial Matthews, Shadrach Trotman and Thomas Buckland, all of whose names had previously appeared on the Wraysbury Court rolls as copyhold owners.

The village saw another major change in 1848 with the arrival of the railway, which opened up employment opportunities and afforded the chance to travel easily and quickly to and from the village. In the History of Wraysbury published in 1862, G.W.J. Gyll extolled the benefits to the village:[9]

William Thomas Buckland was the local surveyor and valuer employed to handle the compensation claims resulting from the purchases of land for the new railway.[11] This business of Buckland & Sons grew into an estate agency, which had an office in Windsor High Street for the following 150 years.[12]

Where is Wraysbury, I can scarce find it on the map? asked an associate of G.W.J. Gyll. Once the railway had put the village on the map, the next steps were to improve road access, and more importantly, to alleviate the adverse effects of the frequent floods which often resulted in the village being cut off from the rest of the county. George Harcourt, Lord of the Manor, suggested that a new road should be built on higher ground from Bowry’s Barn to the Colne Bridge, to replace the old road which ran along ditches susceptible to flooding. The 1848 Tithe map, drawn by surveyor W.T. Buckland showing the proposed route of the new road, can be seen at the Centre for Buckinghamshire Studies in Aylesbury. Harcourt also suggested a replacement for the old “Long Bridge” over the River Colne should be built, and a new suspension bridge, designed and paid for by Harcourt, was built by civil engineer Mr Dredge.[9] 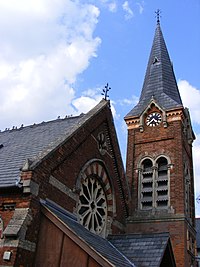 The only place of worship in Wraysbury until 1827 was the Anglican church of St Andrew. Local farmer, surveyor and auctioneer, William Thomas Buckland, wishing to provide an alternative place of worship for non-conformists, built the Wraysbury Baptist Chapel to his own design. The original Baptist meeting place was opened in 1827 and W.T. Buckland was the principal minister until his death some 40 years later. Gyll, in his History of Wraysbury, described the establishment of the chapel:[9]

The City of Refuge by George Tinworth

The new chapel, with its elegant slender tower, was opened on 16 October 1862; the building works had cost around £800.[13] The striking terracotta relief panel, The City of Refuge, on the front elevation of the chapel, was created by the renowned Doulton & Co artist George Tinworth and is signed with his monogram.[14]

After the death of W.T. Buckland, James Doulton, his son-in-law and a cousin of Sir Henry Doulton, took over the preaching duties. Later James’ son-in-law the Reverend Arthur Gostick Shorrock took over the duties. Arthur had been a student preacher in Wraysbury in the 1880s, after which he spent 35 years as a missionary work in Shaanxi, China.

Use in film and television

A flooded quarry in Wraysbury was used a filming location (actually intended to be in France) in the 1985 James Bond film A View to a Kill, in which Bond (played for the last time by Roger Moore) and the corpse of his murdered ally Sir Godfrey Tibbett (Patrick Macnee) were pushed into the water in their Rolls-Royce Silver Cloud by the villainous Max Zorin (Christopher Walken) and his henchman Mayday (Grace Jones). However, Bond avoided drowning by forcing open the door and swimming to the surface.[15]

Wraysbury Stores, the main village store until May 2006, appeared in an advert for the Daily Mail featuring Chris Tarrant. 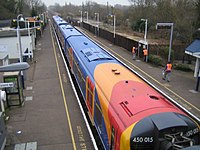 Due to the various gravel pits, the River Thames, lakes and reservoirs (notably “The Pond”), Wraysbury has plenty of wildlife and opportunities for walks. The village has a few Sites of Special Scientific Interest with these being Wraysbury Reservoir Wraysbury and Hythe End Gravel Pits and Wraysbury No 1 Gravel Pit.[16][17][18]

The western part of the village, roughly between the river and the B376 road, is subject to frequent significant flooding, notably in January 2003, January 2014 and February 2014.

The village has two railway stations: Wraysbury and Sunnymeads, both on the Staines to Windsor & Eton line from Windsor to London Waterloo.

In June, Wraysbury holds its annual fete, where stands such as the local vintage and classic car clubs show off their members’ vehicles. There are also activities for children and the tug-of-war held by the scouts, beavers and cubs. There are also the stands of local charities, the local school, usually giving out ice creams, and of course the church’s stands.

Wraysbury Cricket Club plays on the village green and played the MCC in 2009.

The main store in the village was Wraysbury Stores until its closure in May 2006. The shop is now vacant. The building is Victorian and had been continuously occupied since the late 1800s. It was formerly a post office before becoming a general store. It neighbours a garage and fish and chip shop and is opposite the Perseverance pub. There are many shops located on High Street, and there is a park including children’s playground which is a popular spot for dog-walkers and kite-flyers.

1st Wraysbury Scout Group is based on the village green.

Former actor Robert Rietti had a home in Wraysbury, but after his wife died in August 2008, he sold the house in summer 2009.

Former Wraysbury resident Gordon Cullen, an architect renowned for developing the Townscape movement in post-war Britain, designed the Wraysbury Village Hall. It is one of only a few buildings he designed which were actually built. 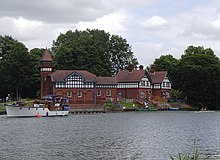 Hythe End is the part of the village closest to Staines, largely a linear development on Staines Road, on the eastern bank of the River Thames close to Bell Weir Lock, with a large minority of properties adjoining the riverside.

Hythe End consists of several riverside homes, mainly on the Island, Hythe End. Gravel pits to the north containing water and reeds make up a Site of Special Scientific Interest. One of the major features of Hythe End is the river water extraction facility. This was built in 1910 by the Metropolitan Water Board to supply water from the River Thames to its works in Ashford Common via the Staines Aqueduct. This first feeds the King George VI Reservoir and continues eastwards, passing the water treatment works at Kempton Park, to provide some of the supply of the Kempton Park Reservoirs another water treatment works at Hampton.

and has its own railway station. Although long part of Wraysbury administratively,

settlement. The station is unmanned with no inside waiting areas.

Both during and after the Second World War, Sunnymeads was a favourite destination for Londoners who would lease or acquire plots and build modest shacks on the river. Few of these original houses still exist as they have been demolished and more permanent, larger houses have been built in their place.

Sunnymeads Masonic Lodge – King John’s hunting lodge may only in name date to the time of the Magna Carta – it is a restored late 14th-century building, dating to the reign of the first Tudor king, Henry VII, which is Grade II* listed.[19]

Friary Island is a low-lying residential island about 400 metres long and 100 metres wide. It is accessed by two bridges over a narrow branch of the River Thames.

At a parish level, the village is represented by eleven councillors of the Wraysbury Parish Council.[20]

We hope to replace this "History" with a more complete section of the website looking at the various aspects of our history in more detail....